Can I Achieve Career Satisfaction as an ND?

If no one in your family has asked the question aloud, perhaps it’s one you’re asking yourself – Is this profession viable? Income notwithstanding, career satisfaction as an ND is the best way to answer that question. An impressive 74% of respondents to our 2015 Graduate Success and Compensation Study, reported they were either satisfied or very satisfied with their naturopathic medical career. An almost unprecedented satisfaction rate given The Conference Board’s report that only 47% of Americans were satisfied with their jobs.* 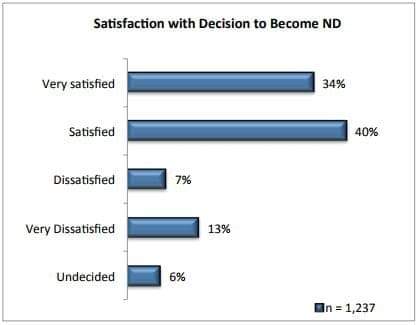 In addition, almost 50% of respondents reported they would recommend naturopathic medicine as a profession, which is on par with the percentage of MDs in the United States who would recommend becoming a physician. And as with ND job satisfaction, income satisfaction also increases with experience and years in practice.**

Naturopathic Doctors who feel successful overall in their career are more likely to be satisfied with their decision to earn an ND degree, their income, their work-life balance, and their financial success. They are also more likely to rate themselves as passionate about the work that they do.

Whether practicing full-time as an ND, part-time as an ND, or in a non-clinical capacity, there are endless options to explore after graduating with an ND degree. Take the first step towards career satisfaction as well as a dynamic and fulfilling journey in the field of naturopathic medicine, by requesting information to find the school that’s right for you.

“I think one of the great strengths of natural medicine is our ability to understand why people are sick and deal with the underlying cause of their illness. More and more, conventional medical doctors are getting frustrated with drugs, because, by far, the majority of drugs only relieve the symptoms – they don’t deal with the underlying cause of why that person is sick.” – Joseph Pizzorno, ND, co-founder and founding president of Bastyr University, renowned author and presidential advisor

Learn more about becoming a naturopathic doctor. Receive information from one of our 8 accredited schools across the U.S. & Canada.