How Naturopathic Medicine Can Improve Fertility

Naturopathic approaches to addressing fertility help couples conceive quickly and safely and work on the root cause of conception issues as well as overall health.
;

In the United States, 12% of women aged 15 to 44 experience impaired fertility, according to the Centers for Disease Control and Prevention. The Government of Canada reports that approximately 16% percent of Canadian couples experience infertility, and this number has doubled since the 1980s.

Both men and women face fertility challenges, and these challenges can take physical and emotional tolls on a couple. Conventional treatments can be extremely expensive and complicated, so many who struggle with infertility seek alternative solutions that are more manageable.

Naturopathic medicine, with its holistic, patient-centric philosophy, has helped countless couples resolve their fertility challenges and conceive easily and safely.

“As a naturopathic physician myself, I was fortunate to experience the extraordinary power of naturopathy in supporting fertility when I conceived a child at the age of 43! It felt like a miracle but really it was a true reminder of what our bodies are capable of with the right support,” says Dr. Sarv Varta Khalsa (pictured to the right).

The key to the naturopathic approach is uncovering what is preventing a couple from conceiving and addressing the underlying causes of infertility.

“As a naturopathic doctor, I look at the whole person; family history, medical history, environmental exposures, physical activity level, diet, sleep patterns, significant stressors—and how these factors may negatively impact the ability to get pregnant. Problems can manifest as hormonal imbalances (irregular periods, luteal phase defects, impaired ovulation, polycystic ovarian syndrome), decreased sperm production or quality, obesity, or metabolic syndrome. The modalities that we are trained to utilize as naturopathic doctors, combined with our emphasis on an individualized, patient-centered approach, give us a wide range of tools to use. This includes nutrition and lifestyle counseling, herbal medicine, physical medicine, and use of specific nutrient supplementation.”

“There are a wide variety of reasons a woman may not be able to conceive: thyroid, female hormone imbalance, or they might not be educated on when the best time is to try to conceive. This may not even be an issue with the woman, but with the man,” explains Dr. Stephanie Seitz. “Naturopathic doctors help to figure out the cause, but we also educate the patient along the way.”

Proper preconception care is critical to improving fertility and facilitating a healthy pregnancy.

“This comes into play when a couple is starting to plan to get pregnant or perhaps a woman decides to discontinue using hormonal birth control in preparation to get pregnant,” Dr. Blesoff says. “Optimizing both parents’ health will improve chances of healthy egg and sperm development, which often increases the odds of healthy conception and a successful pregnancy. I inform my patients that this approach typically takes a minimum of three to four months—the typical amount of time for egg and sperm maturation.”

“I believe a detox prior to conceiving is very important to lay the groundwork for the best possible environment for the fetus.  A detox can help correct hormonal imbalances in both males and females. Looking at a patient’s lifestyle and decreasing exposure to xeno-estrogens is helpful.”

For women, there are a variety of strategies available to help improve fertility.

“The most common reason for infertility in the women I see is poor egg quality, which can decline naturally with age or can happen prematurely. In both cases, finding out the ‘why’ of the decline is essential. Causes can be nutritional and hormonal. Research has demonstrated that for nutritional causes, supplementation with antioxidants such as melatonin, several vitamins, and other plant-based antioxidants can be helpful to improve egg quality.”

“What I have found to help personally and in practice is cleaning up the diet, taking the right prenatal supplements, acupuncture, and exercise. I recommend the following:

“I help women improve their quality of sleep, optimize their intake of healthy sources of protein, and develop effective coping strategies for significant stressors in their daily routine, which often include the stress, anxiety, and grief of their fertility challenges,” says Dr. Blesoff. “I use herbal medicine to address this, in addition to a referral for counseling, therapy, and acupuncture.”

“Two of the issues plaguing women today are endometriosis and polycystic ovary syndrome (PCOS), which interfere with fertility,” Dr. Anderson says. “Naturopathic medicine has a multitude of remedies that work to balance hormones, which is the underlying cause of these syndromes. Seed cycling can be miraculous in regulating hormones. N-Acetyl Cysteine (NAC) can decrease endometriomas and thus improve chances of pregnancy.”

“Balancing the woman’s circadian rhythm and utilizing lunaception can assist with improving fertility. In a study done by Northwestern University with lab mice, reduction in reproductive success of up to 78 percent was shown when rhythms were disrupted,” she adds.

“Utilizing homeopathy can help in a multitude of ways.” she continues. “With the correct homeopathic remedy, I have seen improvements with a woman’s cycle and libido, thus improving chances of a pregnancy.”

“My approach to fertility almost always includes acupuncture as part of my comprehensive plan. I have consistently seen better results since I started utilizing acupuncture to regulate and support the body systems and for stress management as this is often a significant factor in a woman’s ability to conceive.”

There are also many different naturopathic approaches to help men improve fertility.

“While individual recommendations may vary, there are some general tips to support healthy sperm production and quality,” Dr. Blesoff says. These include “staying well hydrated during the day, keeping heat-producing electronics away from the pelvis, optimizing intake of quality protein, and eating a colorful variety of vegetables and fruits.” In addition, “specific nutrients are helpful for sperm production such as zinc, CoQ10, and antioxidants (vitamins A, C, E, and selenium).”

“Looking at a man’s lifestyle can identify possible issues with fertility. If the man is smoking (marijuana or cigarettes) or drinking alcohol, both of these can impact fertility. Even five alcoholic drinks a week can decrease sperm quality and content,” says Dr. Anderson.

“There is a wide variety of herbs that can improve fertility outcomes,” she adds. “As an example, Tribulus Terrestris can improve fertility for both men and women and has actually been shown to decrease antisperm antibodies with a 61 percent increase in conception rates. However, not just any OTC Tribulus will be effective. Naturopathic doctors are aware of this and have access to the supplements that test for quality.” 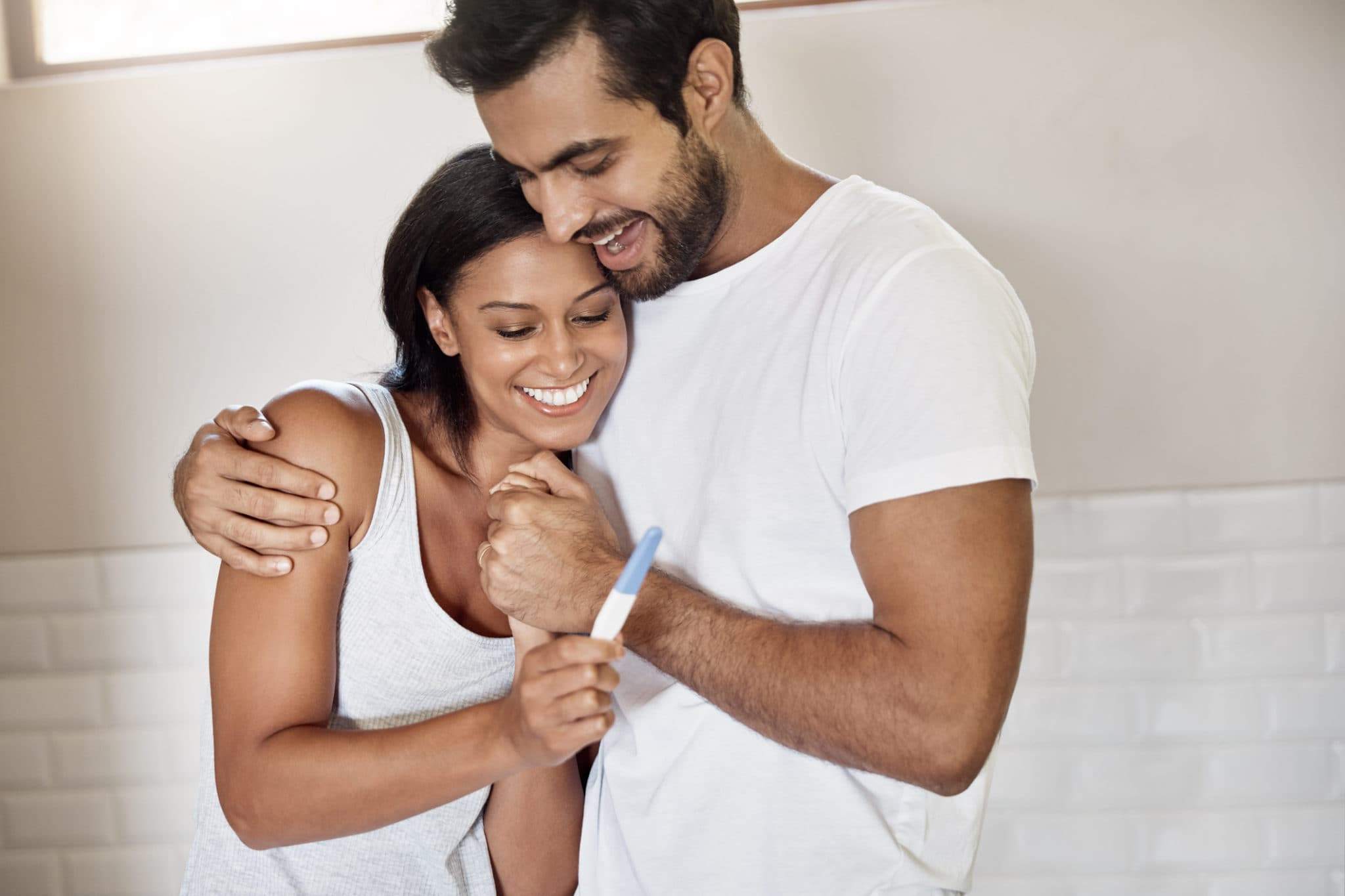 “I had one patient who had tried everything to get pregnant but nothing was successful for her. We tested her iodine level which happened to be low. One month after we had her on an iodine supplement, she became pregnant.”

“I worked with a couple who had been trying to get pregnant for over a year and half and wanted to try naturopathic medicine before pursuing other medical interventions. They didn’t have any significant underlying illnesses. The woman worked as a nurse, didn’t eat regular meals, had an inconsistent work and sleep schedule, irregular menstrual periods, and PMS symptoms. Some of my recommendations included regular meals and snacks that had protein and some type of produce during the day, optimizing sleep quality, herbs and nutrients to balance hormones to have regular menses, and an herb to optimize her energy level and ovulation. For the husband, I gave general dietary recommendations, including a good quality antioxidant blend, and the guideline to keep heat away from his pelvis. At their two month follow up, she reported improved energy, better sleep, and less PMS symptoms. And three months after their initial visit, they were pregnant!”

“A 35-year-old female patient saw me for poor egg quality and infertility. She was also going through IVF, but had had several failed rounds previously. They were recommending an egg donor. We put her and her husband on a preconception plan (multivitamin, fish oil, etc.) and did a deeper evaluation into why her egg quality was low. Her plan included a Mediterranean Diet, some nutritional supplementation, and also herbal medicines, as one issue was a high level of a hormone called prolactin. We tracked her labs each month and saw gradual improvement over three months’ time. After that, we felt she was ready to try to conceive. She still chose to do IVF, but conceived on her first attempt after treatment. She recently returned for treatment again, and let me know she is pregnant with her second child!”

“A 37-year-old female with a ten-year history of painful periods and PMS was interested in becoming pregnant within the next year. Her main concern was preparing her body. I put her on a prenatal, fish oil, probiotic, and vitamin D supplements. I also included DIM to help with her PMS symptoms. I did acupuncture to help with her painful periods and stress. She also cleaned up her diet (removed anti-inflammatory foods and sugar). She was pregnant within five months!”

“I treated a 30-year-old woman who had been trying to get pregnant for over three years. She had a successful pregnancy four years prior but it had taken a year to conceive. She had fatigue, PMS, painful, heavy periods, insomnia and high stress. She had recently improved her diet (organic, whole foods) and was feeling somewhat better with that. We did comprehensive lab testing to evaluate her hormone and nutrient status and I started her on a high-quality prenatal vitamin, fish oil, melatonin (for sleep and antioxidant support), 5-MTHF (for an MTHFR genetic snip), and herbs, DIM and bioidentical progesterone (second half of her cycle) for hormonal balance. We also worked on optimizing thyroid function and she came in for weekly acupuncture treatments for stress management and fertility support. To her delight (and mine), she became pregnant after just two months of treatment!”

“Find a provider you trust,” Dr. Chasse urges. “The process of getting pregnant, for those who struggle with it, can be an emotional roller coaster filled with a lot of ‘what ifs.’ Having a naturopathic physician by your side to weigh your integrative or conventional options can be a big help. And with good treatment, you’ll not only end up with a healthy baby, but healthier habits for mom and dad!”

“The desire to get pregnant and start or continue building a family is very emotional, especially when there are challenges or it’s not happening the way one imagines,” Dr. Blesoff adds. “It is extremely important to acknowledge and honor this fact. Part of a holistic approach to health includes the understanding that your consciousness affects your physical condition. I often tell my patients that it takes time for the naturopathic approach to work. As they follow the recommended health regimen, my advice is to have patience, trust the process, and be gentle with themselves.”

Click here to find a naturopathic doctor you can trust in the United States or Canada.