It’s Okay to Change Your Mind: Changing Careers to Pursue Your Calling

Do what you love and you’ll never work another day in your life. We’ve heard it all before, and maybe there’s some truth to it. But it’s not always easy to “do what you love,” is it? This is particularly true when you haven’t found what you love until later in life, or when you’ve already invested time and energy into another career.

While there are people who go their whole lives knowing their true calling, most experience a career trajectory that’s slightly more jagged.

Take, for example, these three naturopathic doctors, all of whom have chosen to shift careers because they discovered a passion, balance, and fulfillment in naturopathic medicine.

I had classmates who had either just started their first career, or were way into their original careers, who took the leap and made the change to a new profession. I think it’s a testament to the strength of naturopathic medicine that people are willing to take this leap and make that change.

Prior to pursuing her passion in naturopathic medicine, Dr. Tawainna Houston spent several years in social work. She made a career out of helping others, including spending time as a case worker for homeless unemployment readiness services.

“We used to provide sugary snacks, and I’d see behavior changes as we handed out candy bars,” she said. “Clients became more aggressive in their approach toward staff, and I really wanted to know more about why … I wanted to be able to help them in all aspects of their lives.”

At the time that Dr. Houston conducted her search, she wasn’t aware that naturopathic medical schools even existed. Her search led her to the National University of Health Sciences in Chicago.

“I was pretty stable in my life, so I took a few years to wrap my head around the level of commitment I was making. I was taking a risk into something I believe I was being called into: an opportunity for greater service to people.”

Dr. Houston admits that going back to school was a humbling experience after so many years as a professional in a different career.

“It was just another thing I had to deal with as a second career student. I was older. I was in a different field, and working through the challenges of what that meant, of starting something new when I had mastered what I had been doing my whole life.”

While Dr. Houston had to “start from scratch” in some instances, she also discovered that her previous career experiences provided her with the business tools necessary to start and manage a successful medical practice.

At 37, Dr. Barbara Weiss had established a successful senior level marketing career when she decided to pursue a career change in naturopathic medicine at the Canadian College of Naturopathic Medicine.

“For me it was about passion. I just wasn’t satisfied. I was accomplished, but the work itself didn’t interest me.” She feared that if she stayed in her current career, she would lose a sense of self. One thing was holding her back . . . the financial fears of a career change.

Dr. Weiss’ naturopathic doctor, Dr. Anthony Godfrey encouraged her by saying, “You’re never too old to do something that’s more in line with your passion.” He was older than Dr. Weiss when he changed careers from veterinary to naturopathic medicine.

Was it a big financial and time investment to go back to school? Yes, of course it was.

Dr. Brian Crouse spent over 20 years in the food service industry (including owning a restaurant in Long Island, NY) before changing careers to naturopathic medicine.

Prior to his career in food service, Dr. Crouse was in school to become a chiropractor. He ended up leaving chiropractic school to provide for his family. Although he had great success owning his restaurant, Dr. Crouse made a promise to himself that he would continue his education at some point.

As he got older, he realized that a career as a chiropractor – including the physical demands – was no longer ideal. His lifelong passion for helping others resulted in one of life’s strange turns leading him straight to naturopathic medicine.

In the aftermath of Hurricane Katrina, Dr. Crouse visited New Orleans to feed volunteers for three weeks. When he returned home, he developed a strange virus and bacteria he couldn’t relieve through conventional methods. Naturopathic medicine helped him revive his immune system.

After some more soul searching and research, he was ready to commit to the University of Bridgeport School of Naturopathic Medicine. Both of his children were in college. Now was the time to take the plunge. He sold his business, which provided a cushion to survive on, but he still experienced the “fear of the unknown” that many students feel as they begin their journeys.

“I just had faith that it’d work out. I knew the timing was right,” he said.

He, too, relied on his lifelong experiences to get him through school and through owning his own practice.

“I’d been through rough times. I knew I could run a business,” he said. “A lot of people coming out of school don’t have that, and I know what it takes to succeed.” 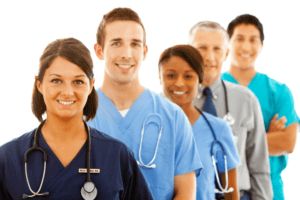 In the wise words of the late Dr. Anthony Godfrey, “You’re never too old to do something that’s more in line with your passion.” If you have an interest in naturopathic medicine, explore it and reach out to people who can help you along your path. The AANMC and the accredited member schools are here to help you make your dream of becoming a naturopathic doctor a reality.