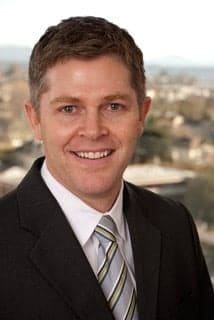 Being a naturopathic doctor is about “helping people—in times of personal crisis, usually health-related—but also in efforts toward living a healthier, more fulfilling life.”

Dr. Chad Aschtgen came across naturopathic medicine by accident. He saw a small Bastyr poster on the wall at a health food store while he was attending university in Boulder, Colorado. Given his interests in the outdoors and holistic health care, ND school was a natural next step for him.

Before attending Bastyr, Dr. Aschtgen was an instructor for the National Outdoor Leadership School, leading courses in the North Cascades, the Canadian Coastal Range, the Yukon, Wyoming, and more.

Discovering his passion at Bastyr

Dr. Aschtgen chose Bastyr because of the school’s “reputation for combining science and research with the traditional medicine modalities.” While studying there, he began to really connect with naturopathic medicine. “I was a few years into the program at Bastyr and realized that my interest in the coursework and profession continued to grow and strengthen,” he says. He soon became more involved by joining professional organizations and serving as a teaching assistant.

Of his time at Bastyr, Dr. Aschtgen says, “I gained a pathway into a very satisfying profession where I have been able to be quite successful. In retrospect, I also developed some great connections with colleagues who I continue to work and collaborate with still today.”

After graduation, Dr. Aschtgen went on to a residency program at the Cancer Treatment Centers of America at Midwestern Regional Medical Center. There, he had the opportunity to learn from some of the most well known naturopathic oncologists in the field.

Now, he keeps busy with his practice, Seattle Integrative Oncology, which has three clinic locations in Seattle, Olympia, and Everett. His patients range from those currently undergoing conventional therapy or surveillance, to those with a history of cancer themselves or in their family.

With all these commitments, he still manages to maintain a healthy work-life balance. “I very much like being self-employed with a tremendous amount of flexibility in my schedule. I try to take no less than six weeks of vacation away from clinic each year,” he says.

Dr. Aschtgen says those considering a career in naturopathic medicine should “meet and spend time with a number of practicing naturopathic physicians. Have lunch with one in your home town. Try to spend a day with one who practices in a location and type of practice that you could see yourself at in the future. Build relationships now, before school, as well as all throughout school.”

“Consider school and classwork as just the beginning of your education,” he adds. “Take advantage of every opportunity, including conferences, weekend seminars, after school events, and more to learn about what niche of naturopathic medicine may be right for you and begin to chart a path for yourself so that once graduation comes you have at least one great opportunity, possibly more, for further training and mentorship.”

Given Dr. Aschtgen’s full schedule and fulfilling career, aspiring NDs would do well to heed his advice.

Flexibility of a Naturopathic Doctor Degree
Comments are closed.