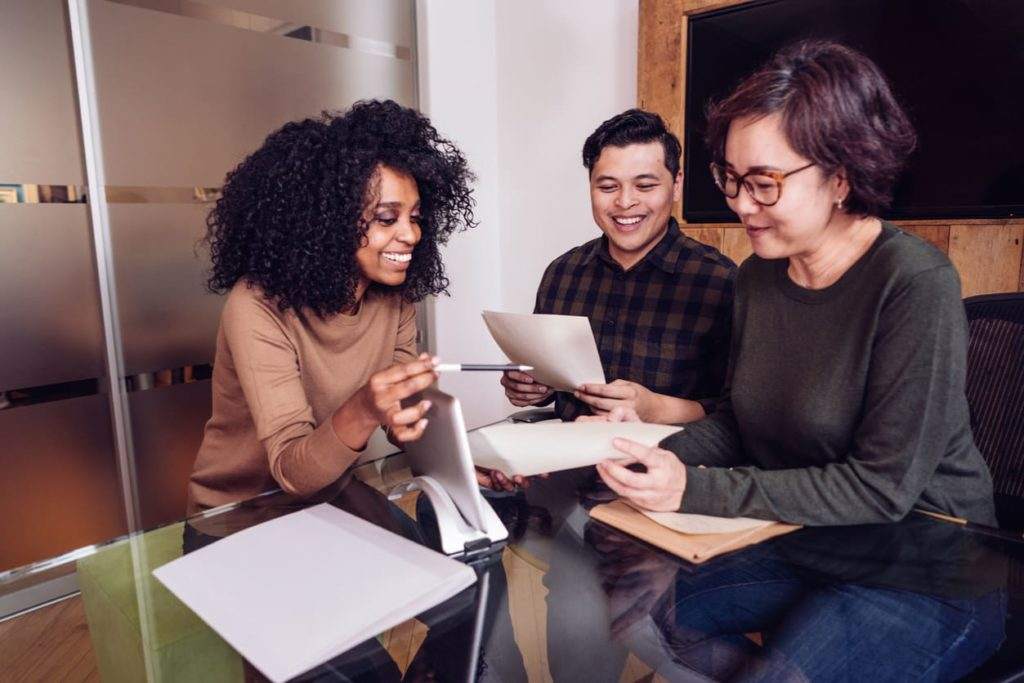 Dr. JoAnn Yanez, AANMC executive director, joins KCAA’s NBC LA affiliate “On the Brink” to discuss the power of mentorship, and what it can offer you personally and professionally.

Erin Brinker: We are On the Brink, the morning show, on KCAA AM 1050, FM 106.5, and FM 102.3. I am super excited to welcome back to the show, Dr. JoAnn Yanez. She is the executive director for the Association of Accredited Naturopathic Medical Colleges. She joins us once a month to talk about all things health related, naturopathic and otherwise. Dr. Yanez, welcome to the show.

Dr. JoAnn Yanez: Thank you so much. Thanks for having me folks.

Erin Brinker: Did you enjoy your holidays?

Dr. JoAnn Yanez: I did. I hope you all did as well. You know what I’m enjoying today?

Dr. JoAnn Yanez: Who knew? They have so many different days now, that it’s hard to keep track of them all.

Erin Brinker: That one is a beautiful one. In our last segment, we were talking about issues of despair and how human connection is important. Mentors are a huge part of that.

Dr. JoAnn Yanez: They are a huge part of it. There’s actually research that’s been done on working professionals and folks that have mentors in their work environment and people that don’t. It’s amazing. Folks that have mentors are more likely to get a raise. They’re more likely to get a promotion. They’re happier in their jobs. The folks that do the mentorship, who are the actual mentor, report higher job satisfaction and professional connection. That professional connection part and the personal connection part that you just talked about, is so important. And It’s interesting, now I hear even from my own colleagues, where maybe they haven’t been able to find a mentor in the traditional sense, and they’re getting personal coaches.

Erin Brinker: They’re feeling that need for themselves.

Dr. JoAnn Yanez: Yes. They’re feeling that need for themselves professionally and maybe there isn’t somebody who’s doing exactly what they want or they haven’t been able to find that. So, they’re going and hiring coaches for work.

Erin Brinker: It’s interesting, in this area, the number of people going to college who are the first in their families to go to college, is quite large in the San Bernardino and Riverside counties, especially in San Bernardino. Students who have a mentor when they start college fare much better, are much more likely to persist to graduation and just have a better overall experience than those who don’t. For youth, mentoring is incredibly important as well.

Dr. JoAnn Yanez: Yes, it is. Some of the data… I know that maybe this is embedded in that San Bernardino data, but some of the data around diversity definitely demonstrates that first-generation or folks who are coming from a disadvantaged background, really can be helped with a hand up in support and resources to help ensure that they’re successful. They may not have had the same type of family support that other folks might have had coming into school. They’re just as capable, if not more so, of working hard and doing well, but there might be some additional resources that they may need. There was one recent article on diversity that I was reading about that spoke to Native American students, and assisting them and getting work study so that they could stay in school, in those early years of school because many do have to provide support back home, even though they’re in school.  It’s very interesting to see that there isn’t a one size fits all approach in success. That common thread is help, is asking for help, and getting help, whether it’s a mentor or a coach or an advisor or whatever. Asking for that help and seeking it out and making sure that you’re also receptive to getting help. Sometimes folks are proud and they don’t want to admit that they’re lost or they need help until it’s too late. I wrote an article last month about mentorship and it’s just as important with the mentor, to be sensitive to what the mentee needs, but also the mentee to be able to receive that feedback and to ask for help, and to say what they need. It’s a bilateral relationship.

Erin Brinker: I think about doctors, especially now naturopathic and other independent doctors, who generally, they’ll put a shingle out and have their own practice or have a small practice as opposed to being part of a majorly large group like Kaiser Permanente. In that point, connection with others in the field, people who have been doing it longer, becomes incredibly important, I would imagine.

Dr. JoAnn Yanez: It is. It’s one of the pieces of advice that I always share with prospective or new students, is the power of mentorship, the need for networking. If you are starting a business… Erin, would you think of starting a restaurant, or any other type of small business without talking to other people who’ve started restaurants and what worked, what didn’t work, what did you learn? What do you wish you knew? Most people, if they’re doing it right, wouldn’t enter into some sort of a new business without doing a lot of homework, without finding out what best practices were, what works, what are the pitfalls, what should I look to avoid? Those types of things. In naturopathic medicine, like in any other practice where many people are opening up their own business, it’s really important. It’s an important step in doing your homework, to find that mentorship, to seek that out, and find out what’s worked before.

Dr. JoAnn Yanez: We do and our work focuses right now a lot more on the academic leadership and helping to build up another network of up and coming academic leaders. That is another area where we see, not a lot of people who even recognize that it’s a career path. Then once they do, it’s like, “Oh wait, I have to learn how to teach. I have to learn how to lead. I have to learn all of these other things that I didn’t get in medical school necessarily. Curriculum plans. I know that you have loved ones in academia. Teaching is an art.

Erin Brinker: It is.

Dr. JoAnn Yanez: Leadership is an art. That’s not always an art everyone succeeds in very well.

Erin Brinker: Not everybody has that gift.

Dr. JoAnn Yanez: No, not everyone has that gift. There are some that do, and how do you foster that? Yes, we’re definitely focused on promoting that and looking at that. I don’t know if you’ve had mentors, but I’ve had mentors along the way and part of my passion is giving back. I still seek out mentors. I think it gets a little harder the further along you are in your career sometimes, to find folks who have the level, the skill sets, and the things you need for mentorship. I’m always leaning on colleagues. Other executive directors and I will have powwows and so on, from time to time. What’s working for you? What’s not working for you? I seek that out even with my role in my job in seeking out mentorship and belonging to professional associations that have other folks that are doing what I do. It’s really important to continually, as part of a process of continual improvement, self-improvement, and self-awareness to… And I know we’ve talked about self-awareness before… But to have that mentor or a network of social support within your profession to bounce off ideas. Hey, I’m feeling this. Or Hey, am I overreacting? Hey, is this normal? Should this be happening? All of those things that are important to have for your own mental and your own career trajectory.

Erin Brinker: It also builds trust within an organization. Any healthy organization has succession planning for all positions, but especially for those at the top. The people who are coming up should be mentored. Number one, you get to know them and trust them. Teams work better when you know each other better. Number two, you figure out what their strengths are. You have somebody coming up in an organization, you find out that they’re more people oriented, they’re numbers oriented, even if they’re working in the accounting department. Okay. So maybe they’ll be in leadership in one segment versus another. That’s part of mentoring, is getting to know the people that you are working with.

Dr. JoAnn Yanez: Absolutely. It’s really important, I think, and what you’re mentioning, with any sort of work environment, whether it’s an association like mine or a school or a regular business or a medical center, to know people’s strengths and weaknesses. Help them know those strengths and the weaknesses. It allows you, as a leader, to get the right people in the right positions to know what you need and when you need it. I think there’s a component of that as well. That mentorship really is important.

I think as some of the younger academic leaders that are starting to participate in some of my groups, and seeing them mature and seeing them grow and it’s really awesome to see, and inspiring to see people learning. Oh, here’s a way that I can get better engagement in my meetings. Here’s a way that I can get people to respond to my emails. Basic stuff that we take for granted. It’s fun to see it grow. I always have a rule for myself, okay, if anything… but I’ve had to learn it the hard way. If I’m having to email you more than a couple of times on a topic, it’s time to take it to the phone. Those are just things that I live by it. If there’s an email thread of a bunch of stuff, or if something is maybe going to elicit an emotion, let’s take it to a phone call, or better yet if face to face, if you can do that. Those are the things that I had to learn the hard way. I had to learn after email threads of 15 back and forth emails.

Erin Brinker: Everybody misunderstanding what’s happening and getting more and more frustrated or annoyed or hurt or whatever.

Dr. JoAnn Yanez: Absolutely. Absolutely. If I could pass on a little bit of the things I’ve learned the hard way to someone else, and keep them from making that mistake, I would love the opportunity. I think the mentorship month that we’re in now, culminates with thank your mentor on the 30th. I have a long list of folks that I’m going to be emailing that day and thanking.

Erin Brinker: Wonderful. Well Dr. Yanez, this has been enlightening and fun. Tell people how they can find you and follow you and learn more about the AANMC.

Dr. JoAnn Yanez: You bet. We are on Instagram, Twitter, Pinterest, Facebook, and LinkedIn. aanmc.org is our web handle. We host monthly webinars. We’ll have one this Friday about changing careers. If you’re interested or thinking about a career in naturopathic medicine, I hope you can join us.

Erin Brinker: Wonderful. Well it has been a treat as always. Dr. Yanez, thank you so much for joining us and have a wonderful rest of the week.

Dr. JoAnn Yanez: You bet. Thanks to you and same to you all.

Erin Brinker: We are On the Brink, the morning show on KCAA. We’ll be right back.

Changing Your Career to Naturopathic Medicine
Comments are closed.