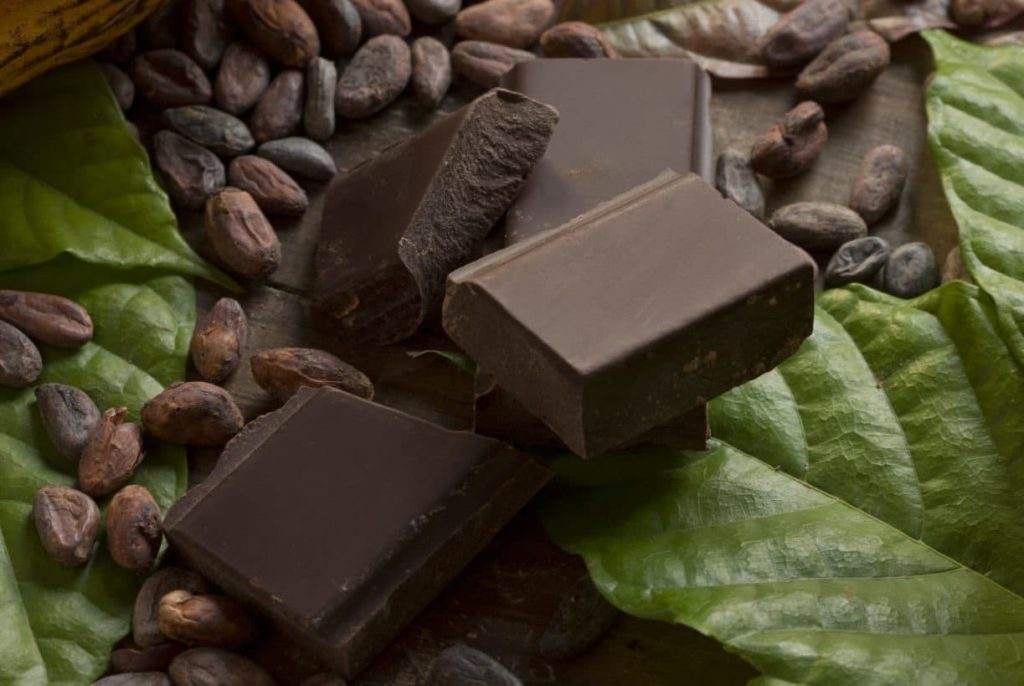 Welcome back to The Naturopathic Kitchen. As always, our focus is to learn more about bringing new, fun, and healthy foods into our home kitchens. Today we will take a closer look at a flavorful favorite, chocolate!

Though today most people associate chocolate with candy, desserts, and other sweet treats, this was not always the case. Over its 4000-year history, chocolate has predominantly been consumed as a beverage, but usually in its bitter, unsweetened form. Evidence of ancient civilizations’ use of chocolate dates back to at least 1900BC.1 The Mayans made a concoction that was a combination of crushed cocoa beans, chili peppers, and water. The bitter, unsweetened brew was heated and poured multiple times until frothy. In fact, the word “chocolate” is most likely derived from the ancient Mayan phrase for bitter water, which was “xocolatl.”2 Chocolate also had other uses in society. For both the Mayans and Aztecs, money really did grow on trees, as both civilizations used cocoa beans to barter as a form of currency.2 It is rumored  that the famous Aztec King, Montezuma II, drank as many as 50 cups of chocolate per day!

It wasn’t until the 1500s that chocolate made its way to Europe.3 The exact origins of chocolate in Europe are not clear, but it is generally agreed upon that it first appeared in Spain where it quickly became a favorite of the Spanish royal court. Soon, other European countries such as France and Italy were importing chocolate. The Europeans began combining chocolate with sugar, spices, and other flavorings, and soon trendy chocolate houses began popping up in major European cities as a place for the wealthy to indulge.

Today, chocolate is enjoyed by people of all socioeconomic levels, mostly as sweet confections rather than in liquid form. Although some famous chocolatiers maintain a commitment to ingredient purity, in most cases, modern chocolate is a highly refined and mass produced product. A staggering 90% of the world’s cocoa supply is grown on family farms that support themselves by growing and selling cocoa beans.4 The work is hard and they are often paid very little for their efforts. Some estimate that 40% of cocoa is slave grown.5 With demand for cocoa rising and prices of cocoa beans falling, the owners of cocoa farms struggle to meet the demands of production. Some have turned to low-wage and even slave labor, sometimes involving child slaves acquired through human trafficking, as a means of meeting demands and staying competitive. As such, the standards of fair-trade chocolate were developed.

Chocolate products that are “fair trade” bear a label marking them as such. This means that certain criteria such as non-use of GMO plants or harmful agrochemicals, submitting to and passing regular inspections, and fair wage for their products have been met.6 Being paid a fair wage means that farmers can avoid cost cutting practices that undermine the quality of the product and negatively impact the lives of laborers, as well as practices that lead to destruction of the environment.

Where does chocolate come from? Where can I find it?

Chocolate is available everywhere, but it is important to seek out chocolate that is produced under fair trade or direct trade standards. Fair trade cocoa is typically shade grown and organic. Fair trade cocoa products can often be found in traditional supermarkets, but health food stores are also an excellent resource. Direct trade chocolate is more difficult to find, but local craft chocolatiers are likely to have it.

The contemporary version of chocolate begins with the fruit (beans) of the tree known as Theobroma cacao. Once harvested from their pods, the cocoa beans are fermented, dried, roasted and ground. During the refining process, varying amounts of cocoa butter, chocolate liquor, sugar, and other ingredients are combined to create different forms of chocolate. Chocolate can be purchased in a number of different forms from powder, to solids, to liquid. To be labeled chocolate, the FDA mandates that chocolate must contain at least 35% cocoa solids. Lack of regulation surrounding sugar content can blur the lines between the different types. Commercially available chocolate varieties can include:

Baking Chocolate: Baking chocolate is also known as “bitter” or “unsweetened” chocolate. It looks and smells like chocolate but is extremely bitter without any sweeteners. It provides a rich chocolate flavor in baked goods where it’s bitterness can be countered with the addition of sugar.

Dark Chocolate: Dark chocolate contains between 30-90% cocoa solids. It is a combination of sugar, cocoa butter, chocolate liquor, and some type of an emulsifier such as lecithin. Semi-sweet and bittersweet also fall into this category.

Sweet Dark Chocolate: Sweet dark chocolate is technically classified as “dark chocolate” because it does not contain milk solids, but it does have a higher percentage of sugar and in some cases only 20-40% cocoa solids.

Semi-sweet Chocolate: Originally popularized in reference to branded semi-sweet chocolate chips, this form of chocolate is mainly used in America.

Milk Chocolate: Milk chocolate is distinguished from other types because it also contains some type of dairy milk in the form of condensed milk or dry milk solids. Milk chocolates are often much sweeter than dark chocolate, lighter in color and have a milder chocolate flavor.

White Chocolate: White chocolate contains only cocoa butter with no chocolate liquor or any other cocoa products. By law it must contain at least 20% cocoa butter as well as at least 14% milk solids, and no more than 55% sugar. It does not have the characteristic chocolate flavor. There are products available that use vegetable fat instead of cocoa butter. These products are technically not “white chocolate” at all and should be avoided.

How does chocolate help my health?

Although highly processed chocolate used in the average candy bar is not considered healthy, dark chocolate has been shown to be abundant in heart-healthy antioxidants.7 A number of experimental and clinical studies suggest that chocolate has protective properties against oxidative stress, inflammation, can support blood vessel health, and may prevent the development of plaque in the arteries.7 Chocolate intake is associated with improved cardiovascular health blood sugar control, and may reduce the risk of stroke, heart disease and diabetes. Consuming chocolate in moderation (six servings or less per week) may help prevent these health conditions.8

What medical conditions/symptoms is chocolate good for?

When should chocolate be avoided?

Aside from an outright allergy to chocolate, chocolate can be enjoyed in moderation by everyone- except your pets. Chocolate contains a compound called theobromine that is highly toxic to dogs, cats, and many other animals, because their physiologic mechanisms for breaking down theobromine are not as efficient as humans, resulting in a toxic accumulation of this compound in their systems. Theobromine toxicity can result in muscle tremors, seizures, irregular heart rate, internal bleeding and heart attacks. Among the initial symptoms is severe hyperactivity.

Let’s try out chocolate with these delicious and nutritious recipes!

Make the crust. Soak the dates in hot water for about 15 minutes, or until they soften. Drain and add the dates to a food processor. Process until creamy. Add walnuts and shredded coconut, and process until a homogeneous dough forms. Divide the dough into six equal portions and press evenly into individual mini tart pans with removable bottoms. Alternatively, line a muffin tin with pieces of parchment paper large enough so that the paper goes over the rim and you can pull the tartlets out easily. Refrigerate dough while preparing the filling. Make the filling. Add avocados, brown rice syrup, cocoa powder, chocolate chips, coconut oil, and vanilla to food processor; process until a smooth cream forms. Bring it all together. Fill the pre-made crusts with the avocado filling and refrigerate for at least 1 hour. Gently remove the tartlets from the pans, and decorate with fresh berries and mint leaves.

A special thank you to Bastyr University for this amazing recipe!

Thank you to IHeartVegetables for this wonderful recipe!

How Do YOU Take Care of Your Mental Health?
Comments are closed.